The weather is terrible today but in the midst of it all, this double rainbow appeared in front of my front door. Always look for the SIGNS of Abba Father’s love and goodness in the storm that is trying to blow you off course. And always remember that in Jesus you are not fighting for victory but you are fighting FROM a place of victory. #VictoriousInEveryBattle 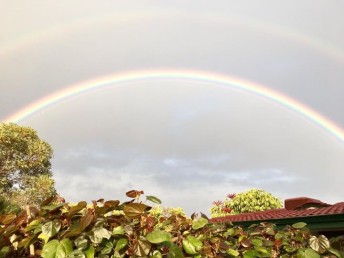 A year ago exactly I posted this word. After my double-rainbow sign (God-wink) of yesterday, I thought this needed to be reposted. 😘😘😘

AS YOU BLOW HIM KISSES, HE RESPONDS WITH HIS WINKS !!!

Today I saw in the spirit someone blowing kisses to the LORD. Then I saw Him look down from heaven and WINKED. As he did, a gust of wind swept across the skies and many black birds suddenly began to fall out of the skies, dead! The ground was littered with them.

As I pondered about this vision, this came to me:

Your PRAYERS are like “kisses” that you BLOW to your FATHER and He RESPONDS in agreement by BREATHING His RUACH (SPIRIT), slaying the ‘birds of the air’ (Matthew 23:4) that have been devouring your blessings!

‘GOD-WINK’ then became the focus and I looked up its definition:

GOD-WINK – An event or personal experience, often identified as coincidence (there’s no coincidence with God!) so astonishing that it is seen as a sign of DIVINE INTERVENTION, especially when perceived as the answer to a PRAYER

Many may remember a moment in your lives when a loved one, has given you a wink from across the table or room. No word was needed because you knew what that meant to you. It was a special, private or intimidate moment between you and your loved one and IT MEANT SOMETHING to you. It was a non-verbal communication that only the two of you understood.

Your FATHER’s WINKS are like that. It’s a “receipt” to what you’ve posted to Him, the “return receipt” acknowledging your mail (prayer). It’s His “YES” to your prayers!

He’s saying to you: “My child, it’s been well received and it’s all good. You’re not invisible to Me. I see you and everything is going to be alright. I’ve got this! FEAR NOT!”

GOD’s winks (SIGNS) are His REASSURANCE to you that He’s working on bringing about a good outcome in your situation. He is working on the DELIVERY of His promises to you. He’s saying EVERYTHING WILL BE ALRIGHT!

Heavenly FATHER, receive the kisses’ from Your children and in return flood them with Your ‘winks’. We love you, Papa. In JESUS name. Amen!

Surely the Lord God does nothing, Unless He reveals His secret to His servants the prophets. A lion has roared! Who will not fear? The Lord God has spoken! Who can but prophesy?